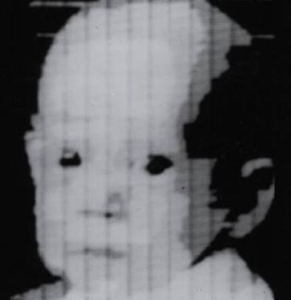 The first digital photography camera was created in 1975. It was Steve Sasson, an electrical engineer working at Kodak, who developed a prototype camera that did not use film but an electronic sensor. The camera was a large device that weighed 3.6 kilos and recorded black and white images on a cassette tape, with a quality of 0.01 megapixel.

In the 1960s, the electronics industry had produced sensors that could record a small monochrome image, known as CCDs. Sasson took a lens, a CCD and an electronic circuit in which he programmed the conversion of the electrical values ​​he sent to the sensor into digital values. With these three elements he was able to develop a prototype digital camera whose design was patented by Kodak in 1978.

In the 90s we can speak of the beginning of the digital era in photography since the first digital camera in history was marketed. At the same time, in the graphic industry for the production of books, magazines and printed matter, more and more digital processes were incorporated, which gave rise to the gradual use of graphic design and photo retouching programs such as Adobe Photoshop.

Kodak commercialized this technology in 1991, the year its Digital Camera System. The proposal was to have a camera that could create files to be printed in newspapers and magazines. The camera had a separate unit connected by a cable, in which the photo taken could be displayed and archived.

It had a 200MB hard drive that could hold 156 images, each with 1.3 megapixels. It sounds little for our days, but it cost a whopping 30,000 dollars. The sensor used by Kodak was of the CCD type, accompanied by a Bayer filter to achieve color. 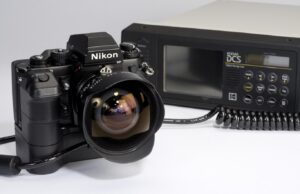 In 1998 Fuji developed the first Digital Minilab, the Fuji Frontier, which allows copies to be made on photographic paper from digital photographs, by using a laser that prints the image from the file on the photosensitive paper.

The main difference with “analog” cameras, with which they have coexisted for a few decades, is that digital systems do not need a film to store the information, there are no chemical processes to record the information and transform it into a photo.

The young engineer Steven Sasson had the mission to find a use for CCD sensors, with the ultimate goal of creating a camera in which there were no moving parts.

Everything had to be digital, from image capture to information storage. It took a year to shape this creature of more than three kilos, which used a sensor from the company Fairchild Semiconductor, with the capacity to record a resolution of 100×100 pixels.

We are talking about December 1975 and the images were in black and white. The moving parts thing was halfway achieved, since the result was temporarily saved in RAM memory, but if we wanted to keep the snapshot forever, we had to record it on tape.

At Mangrove Birding Journeys we have designed digital photograpy tour for anyone of any level. Follow us to know our news and natural targets.